ASRock was one of the earliest vendors to cater to the small-form factor (SFF) PC market with a host of custom-sized motherboards based on notebook platforms in their Vision / Core series units. They ended up missing the NUC bus for the most part, with the Beebox series put into cold storage after Skylake and Kaby Lake were phased out. The industrial design and learnings from the Beebox have since been passed on to ASRock Industrial for systems catering to the commercial and embedded markets.

After Kaby Lake, ASRock shifted focus to Intel’s 5×5 mini-STX form-factor introduced in 2015. While for installation of socketed processors, the form-factor could not support a discrete GPU slot. Around the same time, Intel also started marketing enthusiast NUCs with a discrete notebook GPU soldered on the motherboard / integrated in the package. ASRock has introduced multiple Intel and AMD-based mini-STX DeskMini systems since 2016, and also created the micro-STX form-factor to offer a socketed alternative to the enthusiast NUCs.

Intel’s next big push in the NUC market came with the appearance of Compute Elements and Extreme NUCs, with the latter supporting user-replaceable discrete GPUs. In order to offer alternatives in that segment, ASRock introduced their DeskMeet product line early last year with support for socketed processors and a PCIe x16 slot for installing add-in cards. The review below provides a detailed analysis of the features, performance, and value proposition of the DeskMeet B660 – an 8L SFF PC based on the Intel B660 chipset, capable of accommodating Alder Lake or Raptor Lake CPUs, and selected dual-slot GPUs.

The increase in capabilities and power efficiency of processors, coupled with innovative thermal solutions has also enabled small-form factor machines to enter markets that were restricted to bulky power-hungry tower form-factor machines in the past. While a majority of the SFF and UCFF machines in the market are typically based on sub-45W processors, there is a growing market (in the gaming and workstation space) for small systems that can accommodate socketed CPUs. ASRock’s DeskMini series of mini-STX and micro-STX machines have served this market since the Skylake days. Coinciding with the launch of Intel’s Alder Lake, ASRock has introduced a new option for consumers in a slightly larger form-factor – the DeskMeet B660.

The DeskMeet B660 focuses on the DIY market for gaming and e-sports systems. This segment has served as a growth vector for the otherwise moribund PC market over the last several years. Portabile gaming PCs have the added advantage of being compact, lending themselves to use-cases that are not easily served by traditional tower desktops. Compared to the DeskMini mini-STX series, the new systems bring the following updates:

The package includes the following components:

Compact systems with a PCIe x16 slot and an integrated PSU can be realized with mini-ITX motherboards. Such standard boards are restricted to two DIMM slots due to space constraints. In order to accommodate two additional DIMM slots, ASRock has opted for a proprietary form-factor. Their ‘Deep mini-ITX’ board measures 210mm x 170mm (compared to the 170mm x 170mm of a regular mini-ITX board).

End-users have the flexibility to choose their own CPU, storage device, RAM, and optional discrete GPU. Space constraints impose some limitations on these, though. The 8L system can support liquid cooling if a PCIe add-on card is not used. CPU coolers up to 54mm in height can be used (anything higher would end up bumping into the underside of the PSU). Processors with a TDP of up to 65W can be safely used in air cooling. While select 125W TDP processors are supported, it requires the use of liquid cooling (ruling out the PCIe add-on card usability). F-series SKUs can be used, but it requires the compulsory installation of a video card, as the native display outputs of the B660-ITX require a CPU with an integrated GPU. 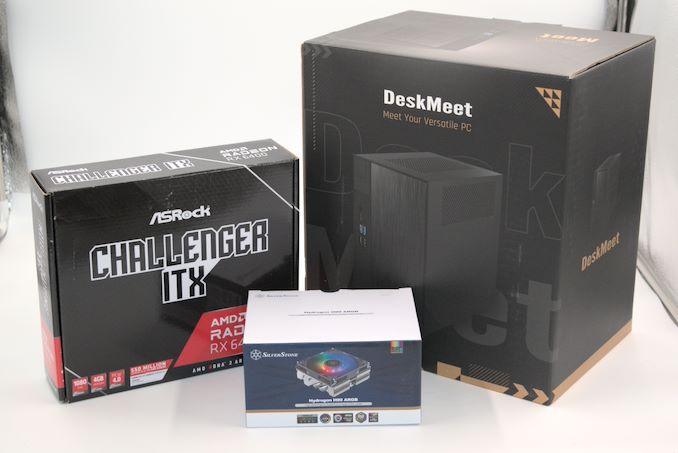 ASRock sampled us the DeskMeet B660 along with their AMD Radeon RX 6400 Challenger ITX video card and an Intel Core i7-12700F Alder Lake-S processor. The following additional components were used to complete the build:

The system is meant to be actively cooled, but the DeskMeet B660 unit by itself doesn’t have any fans bundled with the chassis. The fans of the CPU cooler and video card cooler should suffice for most installations. However, the side of the chassis close to the PCIe slot can also be used to mount a 120mm case cooler or a liquid cooling radiator (thickness up to 45mm). In such cases, the PCIe slot is rendered unusable.

The full specifications of our review configuration are provided in the table below.

Up to four DDR4 DIMMs can be installed in the system. A M.2 2230 slot is available for a Wi-Fi / Bluetooth combo PCIe / USB card. The case has appropriate holes for the antennae. There are two M.2 2280 slots (one next to the PCIe slot, and another on the underside) for installation of NVMe SSDs. The next slot on the underside is PCIe-only, while the other can accommodate both NVMe and SATA SSDs. Unfortunately, the documentation is not clear on which of these slots is directly attached to the CPU. In other boards, the slot that multiplexes the SATA and PCIe lanes usually comes from the chipset (PCH), while the pure PCIe one is from the CPU. Based on this assumption, we reviewed the system with the SSD installed on the underside. 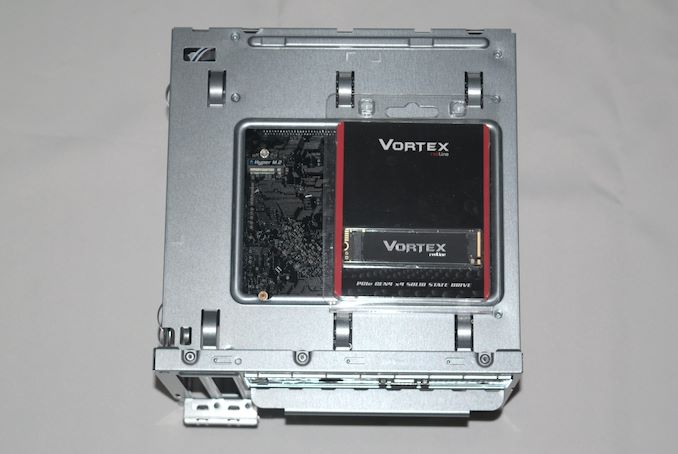 The board contains 3 SATA ports. The case itself allows for the installation of a 3.5″ HDD (in which case, a PCIe add-in card can’t be installed), or two 2.5″ drives (which eliminates the possibility of dual-slot add-in cards, while still allowing single-slot cards to work). Using such SATA drives also precludes the possibility of mounting a fan or a water-cooling radiator in the system.

GPU installation involves releasing a latch and fastening screws after placing the add-in card in place. The PSU is fastened in-place at the very end, with all necessary screws in the back panel. The PSU is not modular, but the number of cables to route is minimal, and cable management is not really much of an issue. It is possible to completely remove the motherboard and I/O shield from the tray, but we didn’t find it necessary during the assembly process.