Elon Musk said he had ‘major side effects’ from his second Covid-19 booster shot that left him feeling like he was ‘dying’.

Musk, 51, took to Twitter to share his experience of the Covid-19 vaccine in response to a retweet of a poll that said 7 percent of adults claimed they experienced major side effects from the Covid vaccine.

The Twitter and Tesla CEO said the second booster ‘crushed me’.

Musk also shared that his younger cousin, who he said was in ‘peak health’, had to be hospitalized after his jab suffering from myocarditis.

Elon Musk said he felt like he was dying after his second booster vaccine. The Twitter and Tesla CEO is pictured in Stavanger, Norway August 29, 2022

‘I had major side effects from my second booster shot. Felt like I was dying for several days. Hopefully, no permanent damage, but I dunno,” Musk tweeted over the weekend.

He added: ‘And my cousin, who is young & in peak health, had a serious case of myocarditis. Had to go to the hospital.

Myocarditis is an inflammation of the heart and is named as a possible, but very rare, side effect of Covid-19 vaccinations.

A large study published in JAMA Network of more than 192 million people who received Covid vaccines found there were 1,626 cases of myocarditis – a rate of 8.5 cases per million people (0.000845 per cent).

Many people have reported side effects from Covid shots, including headaches, a temperature, fatigue and injection site soreness, but in most cases the symptoms only last a few days.

When asked why he had gotten the second booster, Musk said that it was not his choice but because it was a requirement to fly to Germany. It is unclear which trip Musk is referring to as he is understood to have visited Berlin in September 2020 and August 2021.

Musk explained further, detailing which vaccines he had and when.

He said he had Covid-19 before any vaccines were made available, which he described as a mild cold.

‘Then had J&J [Johnson & Johnson] Vaccine with no bad effects, except my arm hurt briefly,’ he said.

‘First mRNA booster was ok, but the second one crushed me.’ 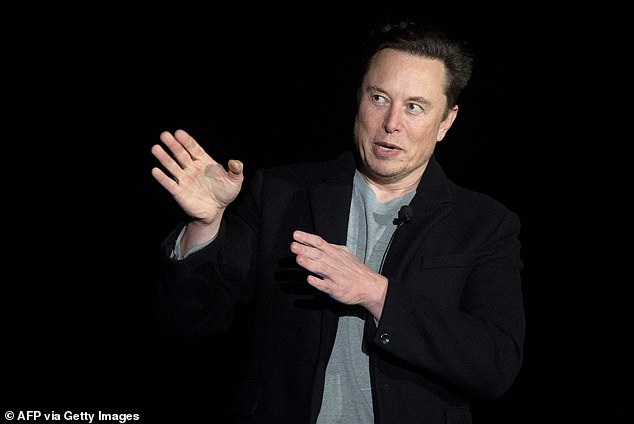 Musk also shared that his younger cousin, who he said was in ‘peak health’, had to be hospitalized after his jab. Pictured: Elon Musk speaks at the PeaceX facility near Boca Chica Village in South Texas, February 10, 2022 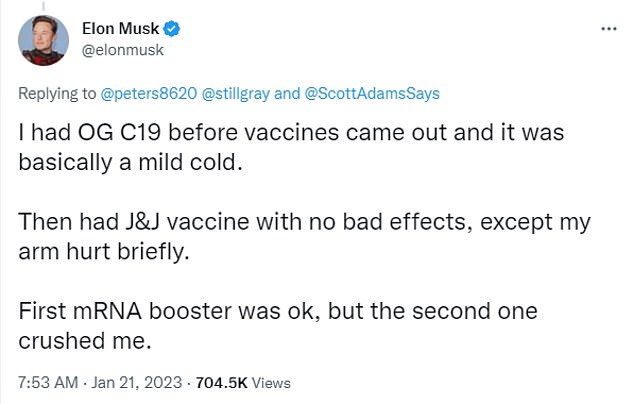 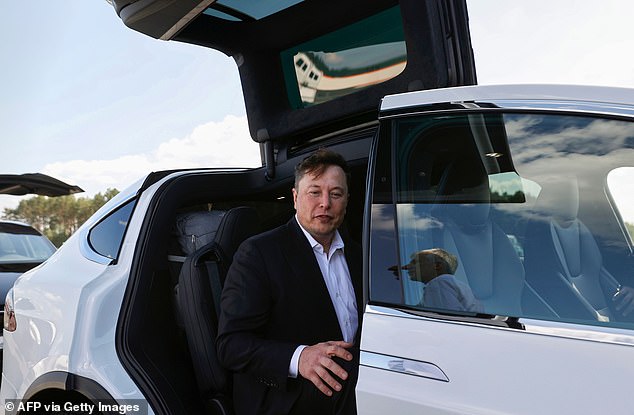 Tesla CEO Elon Musk gets back into his Tesla after talking to the media before visiting the construction site of the future US electric car giant Tesla, on September 3, 2020 in Gruenheide near Berlin.

The original Tweet that Musk was replying to was asking how results from the media company and pollsters Rasmussen Reports should be interpreted.

The report said 68 percent of 260 million US adults said they had received the Covid-19 vaccine, 7 percent of which reported major side effects. This equated to 12 million people.

The Center for Disease Control and Prevention (CDC) said that increased cases of myocarditis and pericarditis – the inflammation of the lining around the heart – were reported around April 2021.

‘These rare cases of myocarditis or pericarditis have occurred most frequently in adolescent and young adult males, ages 16 years and older, within 7 days after receiving the second dose of an mRNA COVID-19 vaccine (Pfizer-BioNTech and Moderna).’ 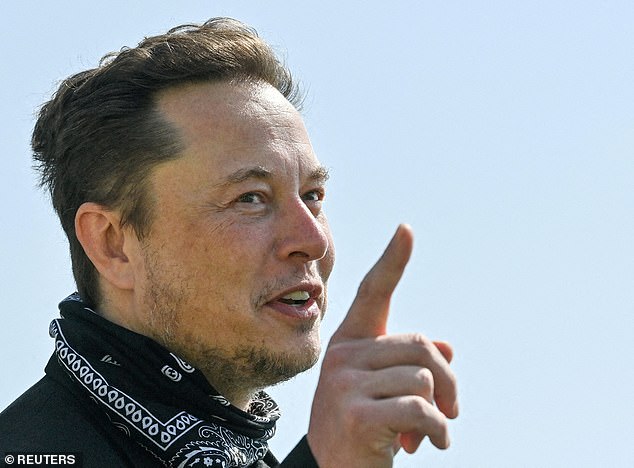 Tesla CEO Elon Musk gestures as he visits the construction site of Tesla’s Gigafactory in Gruenheide near Berlin, Germany, August 13, 2021. 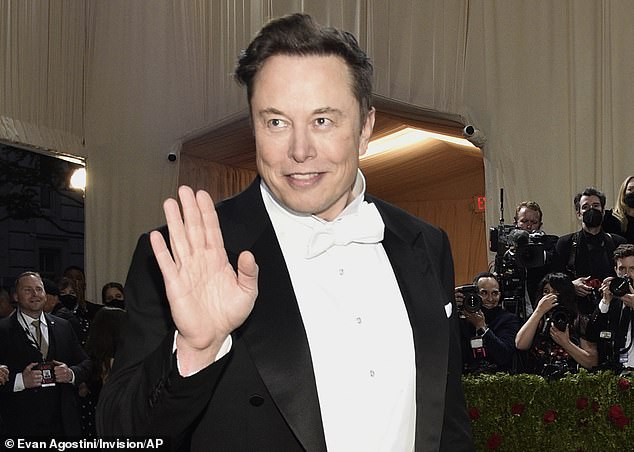 Musk repeatedly shared his thoughts on the vaccine. Pictured: Musk attends the Metropolitan Museum of Art’s Costume Institute in New York, May 2, 2022

The CDC said it ‘continues to recommend the Covid-19 vaccination for everyone 6 months of age and older’.

‘The Advisory Committee on Immunization Practices (ACIP) and CDC have determined that the benefits (such as prevention of COVID-19 cases and its severe outcomes) outweigh the risks of myocarditis and pericarditis after receipt of mRNA COVID-19 vaccines,’ they said. .

Musk has repeatedly shared his thoughts on the vaccine, and has largely been critical of the Covid pandemic and government’s handling of the outbreak’s thoughts.

Previously, he called fears of the virus ‘dumb’ and falsely claimed that children were ‘essentially immune’.

At the height of the pandemic, Musk also said that the nationwide lockdown was a ‘de facto house arrest’.

Since then he has stressed that he does support vaccines because the ‘science is unequivocal’.

He also acquired and helped deliver some 1,000 ventilators to a California hospital in April 2020. 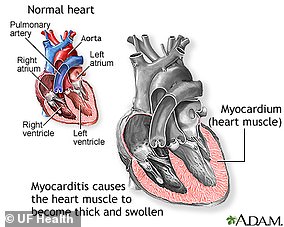 Myocarditis is an uncommon disorder. Most of the time, it is caused by an infection that reaches the heart

Myocarditis is heart inflammation caused by a viral infection, such as COVID-19.

In severe cases, the infection can weaken the heart, cause an abnormal heartbeat, or even lead to death.

Symptoms typically include chest pain or shortness of breath.

Patients can treat the condition with medication aimed at regulating heartbeat and improving heart function. Some rare cases require patients to have a device implanted in their heart to regulate the heartbeat.

Myocarditis is a mild, temporary condition in the vast majority of cases, experts say.

Heart inflammation is uncommon in pro athletes who’ve had a mild COVID-19 infection and most don’t need to be sidelined, according to a 2021 study conducted by major professional sports leagues. 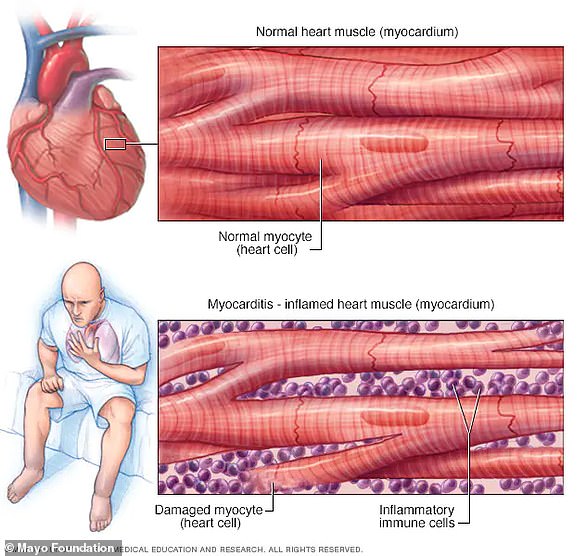