This is the big one, then. Though the Mercedes-AMG range continues to diversify, from flat-plane cranked supercars to seven-seat SUVs, nothing quite represents the division like the C63. Take one ordinary compact Mercedes saloon or wagon, install a mighty V8, watch the buyers flock in. The method extends back to those AMG C-Classes that existed prior to the seminal W204 C63 as well, the C55 and C43, meaning a switch from tradition is arguably more significant here than anywhere else.

It’s some switch, too. The 4.0-litre twin-turbo V8 has been substituted for the AMG A45’s (and new C43’s) 2.0-litre ‘M139’ four-cylinder, with an electrically assisted exhaust gas turbo and a 204hp electric motor. Half the size and half the cylinders for a C63, but a huge uptick in performance: this is a 680hp (or 500kW) C-Class, with system torque rated at 752lb ft. Which are berserk numbers. Just the engine alone makes 476hp at 6,750rpm (or 238hp per liter) and 402lb ft, supplemented by 204hp and 236lb ft from the electric motor. (We don’t know how the system torque figure has been reached, either; the tech info says it’s dependent on gear combination.) Power source aside, there’s no doubting the new C63 has traditionally thumping AMG performance. Both saloon and estate hit 62mph in 3.4 seconds, with up to 174mph possible depending on the top speed limiter. And that’s before the tuners crack the limiter code – might this be the first 2.0-litre car in history capable of 200mph?

Now, making a 680hp, four-cylinder, hybrid C63 has clearly not been the work of a moment, and neither is attempting to explain it. Over the C43 installation, the turbo ICE now has a larger blower to increase output from 406hp in that car to 476hp now. Or the same amount of those old supercharged V8 AMG ’55s used to make back in the day. As is becoming AMG tradition now, the turbo is electrically assisted to help it spool faster and maintain boost pressure even when the throttle is lifted; the C63’s specific output here must create some lag, so everything has been done by the engineers to mitigate that. The belt-driven starter is also part of the ICE package again, starting the engine and taking care of ancillaries. The familiar nine-speed MCT is also standard fit, as is the Drift Mode-capable 4Matic all-wheel drive. 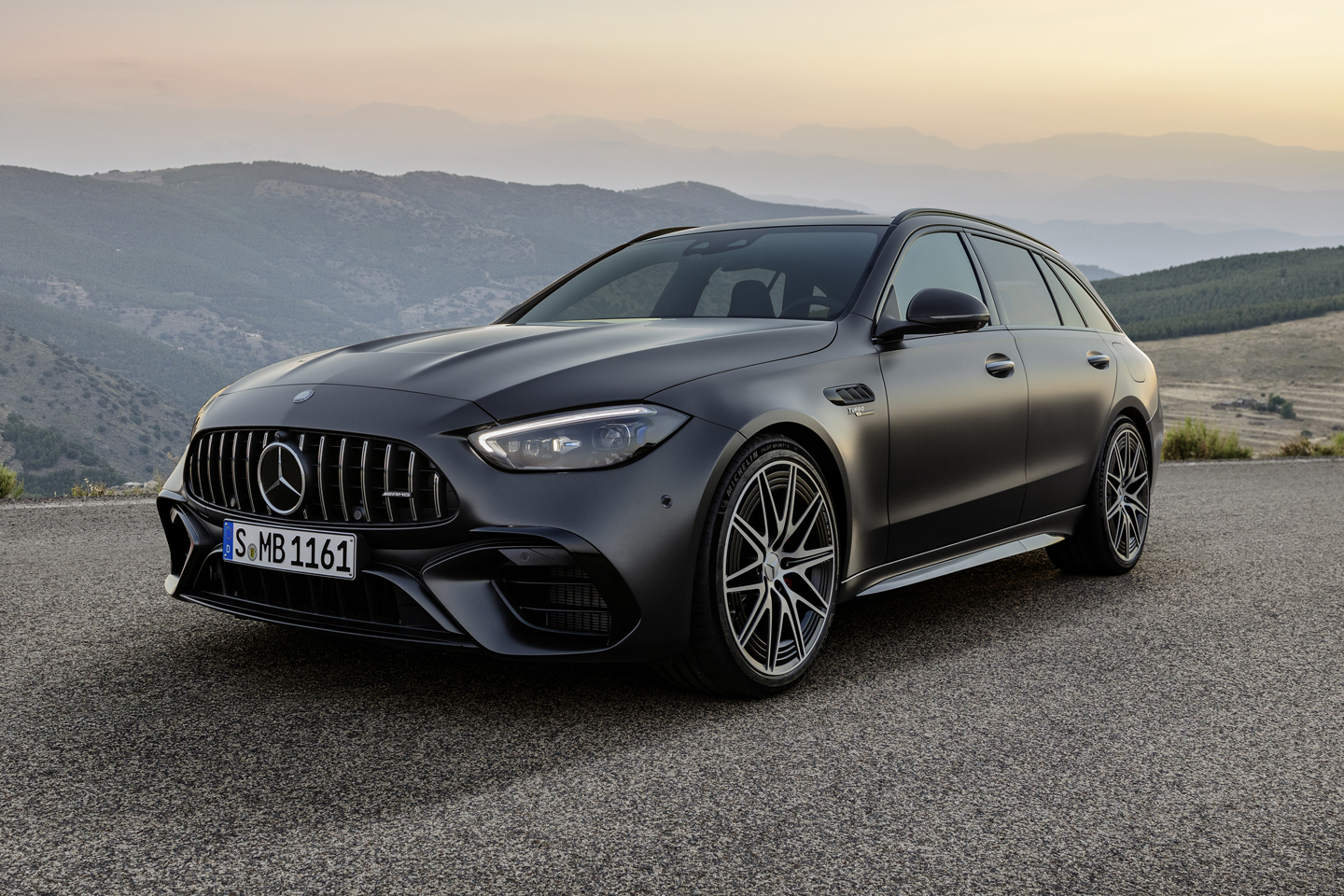 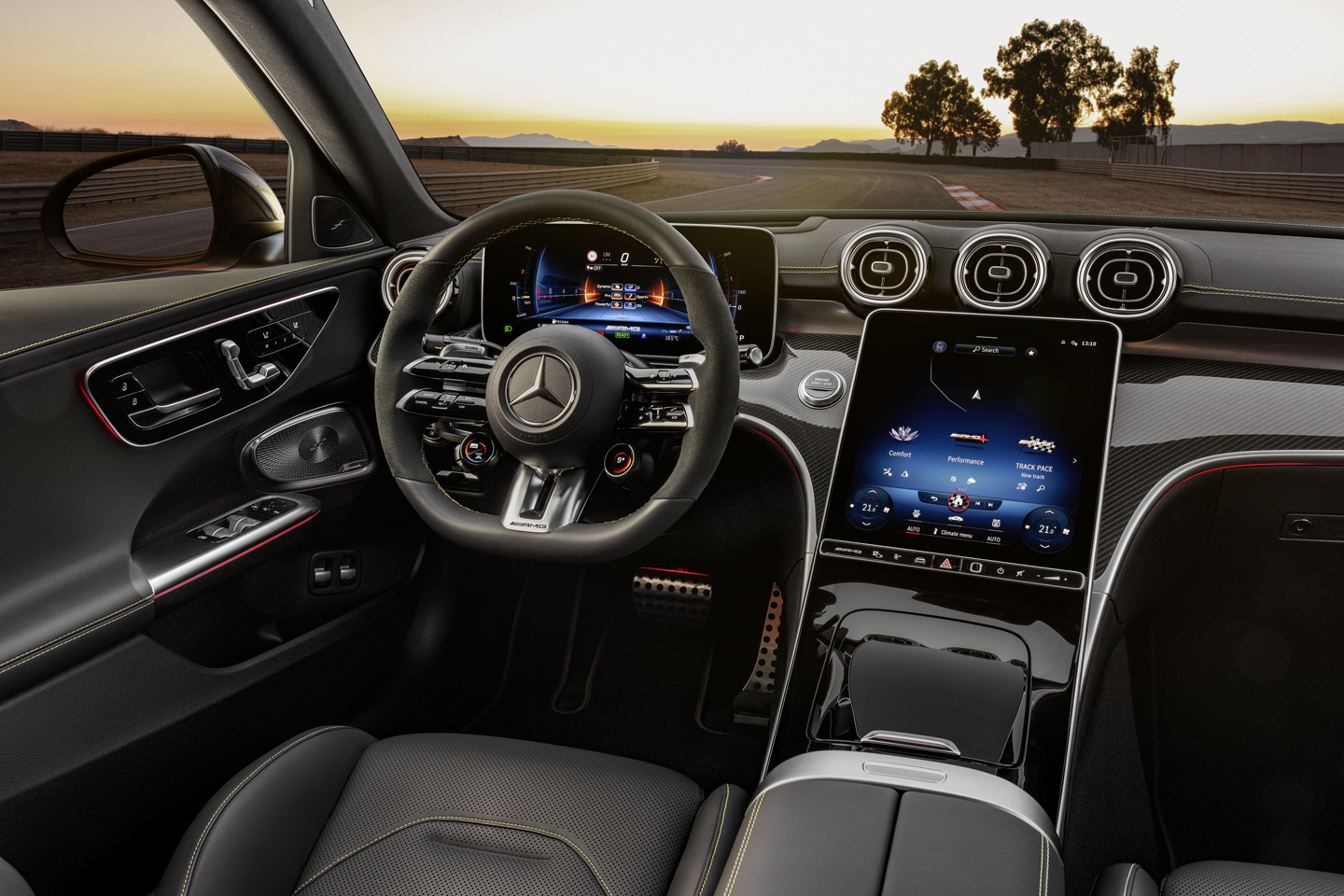 Then it gets very new school Benz – ie very F1 inspired, very AMG E Performance. The C63 follows the template laid out by the GT 63 SE Performance, in that the aim of electrification is to increase performance for a minimal weight gain – as opposed to creating an AMG PHEV with a huge electric range. The headline numbers are a C63 rated at 156g/km, 41mpg and with eight miles of electric range. But there’s far more to it than that.

The C63 is a P3 hybrid; an electric drive unit (EDU) comprised of the 204hp motor, two-speed gearbox and electronically controlled limited-slip diff sits on the rear axle. The 400-volt, 560-cell, 6.1kWh battery, with a continuous 70kW output and 150kW peak available for 10 seconds, sits above it. Each battery cell is liquid-cooled individually (!) by 14 litres of coolant to keep the operating temperature at an average of 45 degrees no matter how it’s used. “Even during fast laps in hybrid mode on the race track, where acceleration (battery is discharged) and deceleration (battery is charged) are frequent, the energy storage system retains its high-performance capacity.”

AMG points to a few advantages of its proprietary hybrid design, weight being primary among them. The battery itself weighs 89kg, meaning 1.7kW per kilo; Apparently conventional batteries without direct cooling are typically half as efficient. Furthermore, because it’s on the rear axle, the electric motor can provide more boost immediately; the same applies to that eLSD, too – everything can respond much more quickly. The EDU location is also said to benefit weight distribution, and boasts ‘very high recuperation efficiency’. The C63 can run on purely electric power up to 125km/h, or 77mph, with possible charging via the onboard 3.7kW charger (and four brake recuperation modes), a charge station or at home. 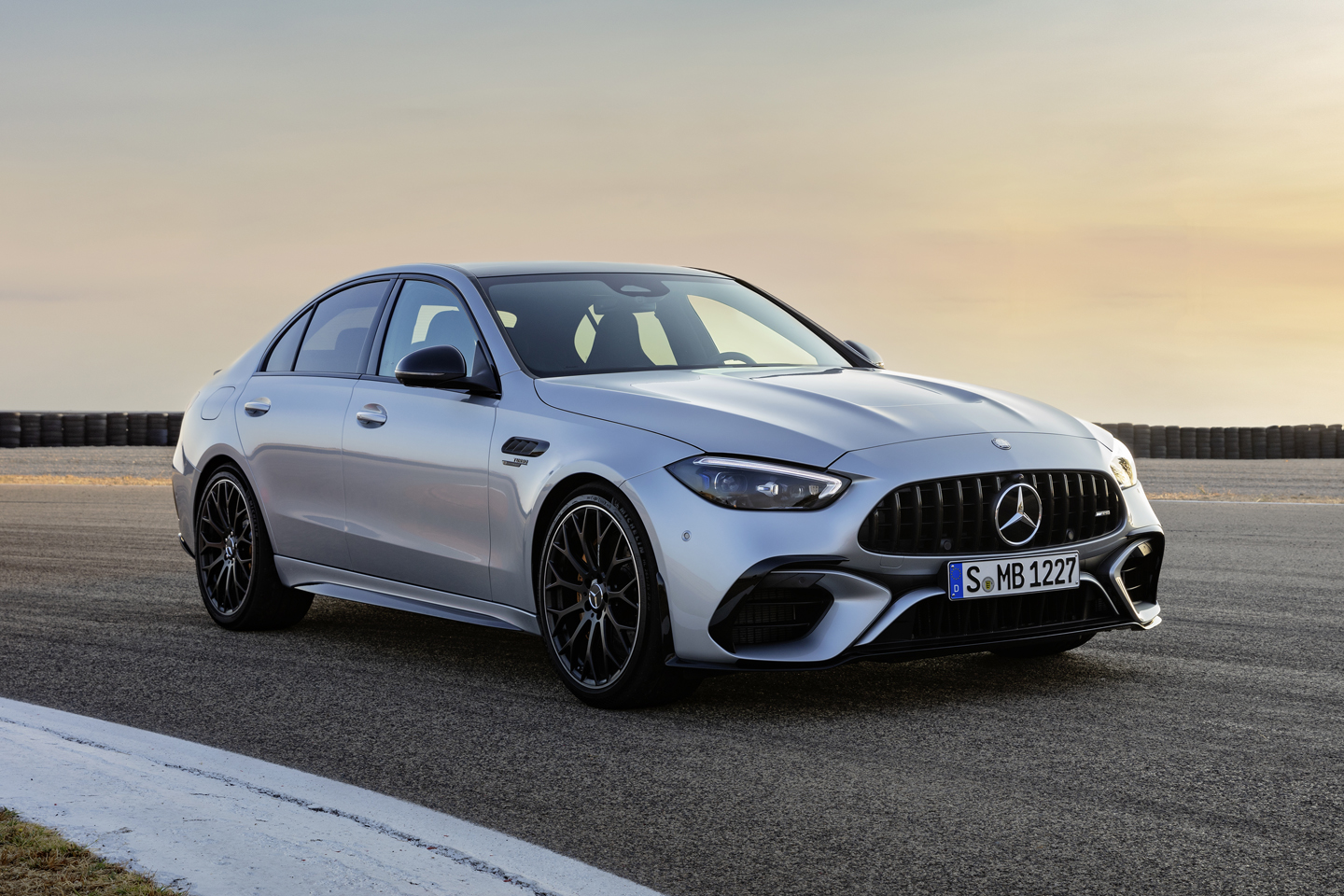 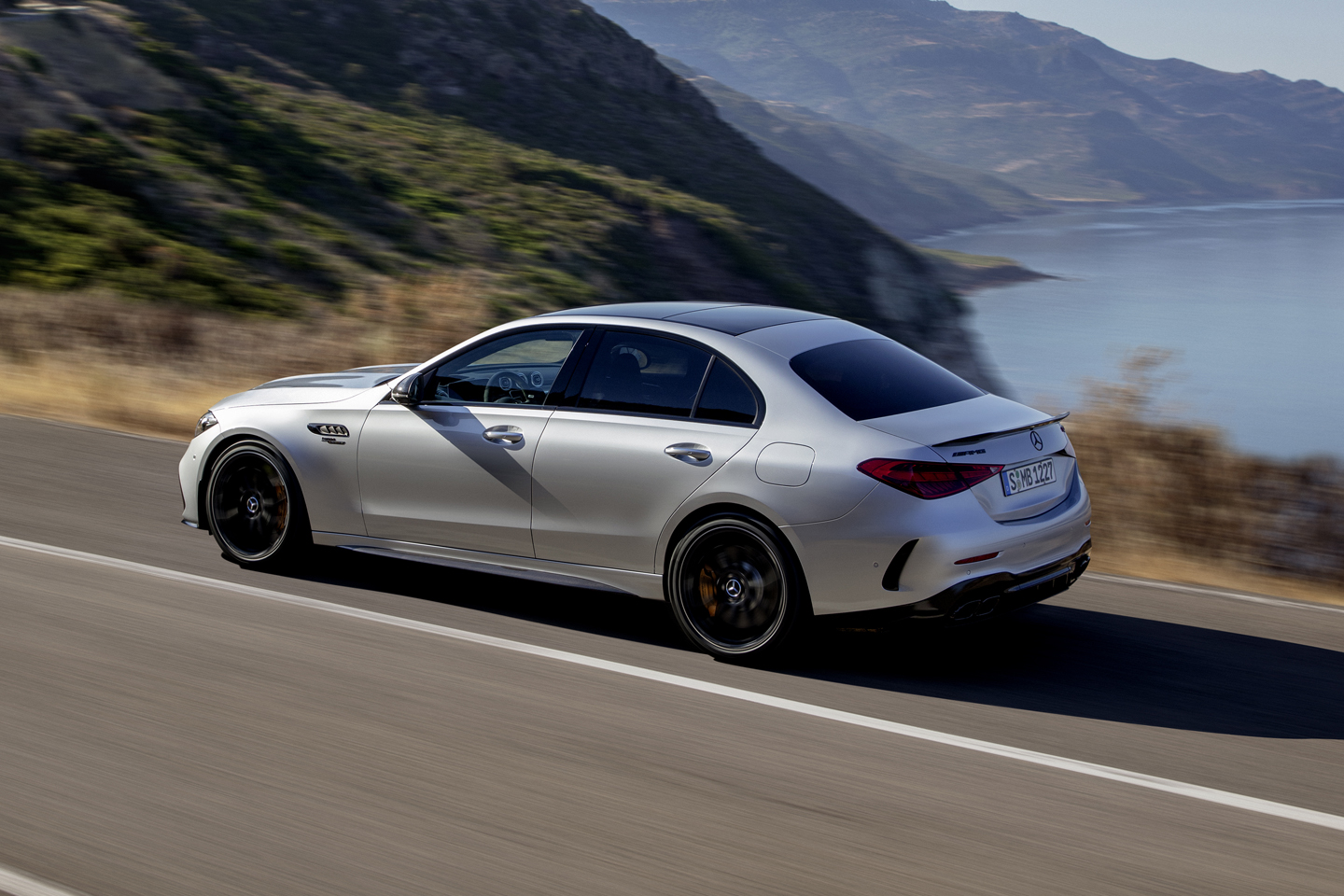 How will this all work in reality? A lot of drive modes, for one thing – even more so than the usual AMG standard. There are eight of them now under AMG Dynamic Select – Electric, Comfort, Battery Hold, Sport, Sport+, Race, Slippery and Individual, each varying how much of a role the electric motor plays as well as the usual AMG Ride Control suspension and steering parameters. Four-wheel steer is standard on the C63 for the first time now as well, with three assistance settings for weight – Comfort, Sport and Sport +. The AMG Dynamics control system is also standard fit, with Basic, Advanced, Pro and Master completely assigned to the different drive modes (or with your own choice in Individual). The racier modes reduce the yaw damping while enhancing agility and feedback, AMG says. Wound up to Race with the Master AMG Dynamics setting, the C63 ‘offers a slightly oversteering vehicle balance, more direct steering and more agile turn-in behaviour’. The AMG effect isn’t just in software, either, as the C63 benefits from bespoke dampers, composite brakes and an overhauled front axle with new knuckles and control arms.

Interestingly, too, the newly electrified rear axle can manage traction before the ESP interventions, reducing the drive torque apportioned by the diff. It’s reckoned that this means the stability control interventions later or not at all, which must be good news. Drift Mode only gets a fleeting mention in the C63 release, as presumably we’re all up to speed on how that works now.

More time, understandably, has been dedicated to how the C63 sounds. More important than ever now, given the charisma of the missing V8. So there’s a loudspeaker to warn pedestrians, while those inside are treated to an ‘immediately recognisable’ AMG sound. It’s achieved by recording the sound of the engine before enriching it (their words, now ours) and then sending it out via the sound system (with some help from the exterior speakers as well). Complex, then, but what else did you expect? 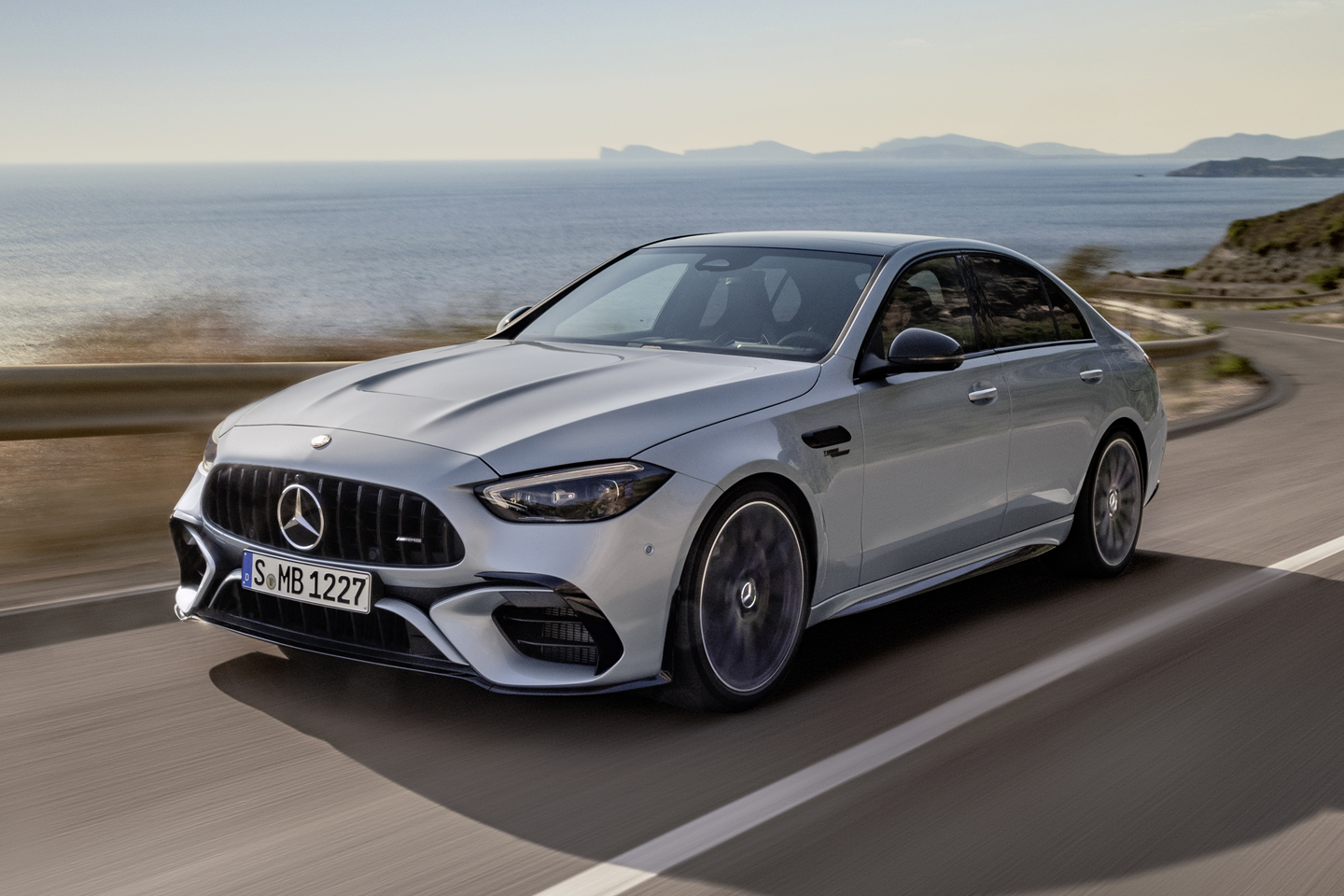 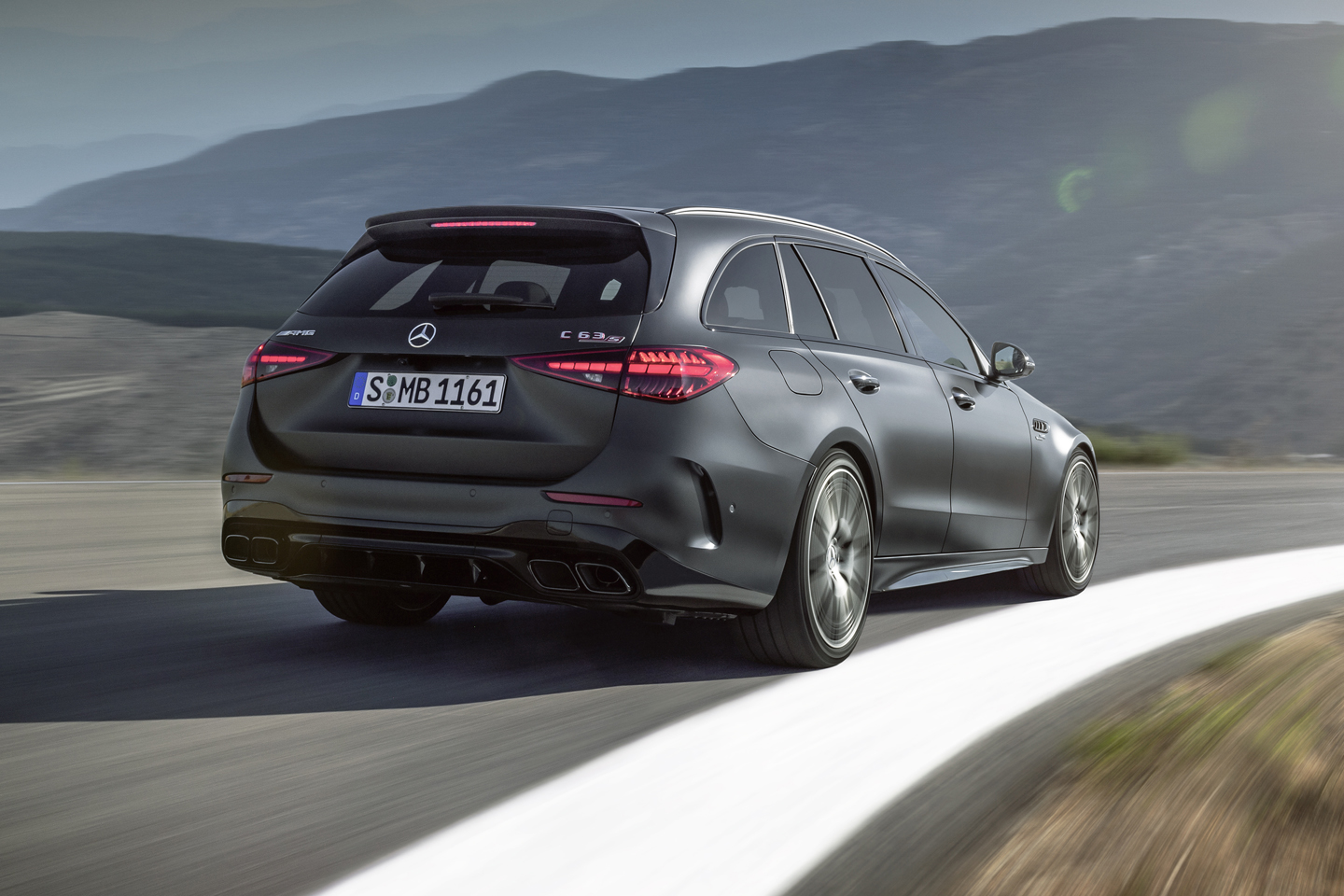 Elsewhere, the new C63 is a reassuringly familiar AMG styling-wise. It’s a meaner, moodier C-Class, as is ’63 tradition – it doesn’t scream 680hp at you, either as a four-door saloon or five-door estate. However, there are some changes once you get into the nitty gritty. Both are built off ‘extensively modified’ AMG shells, with wider front wings and 50mm extra length in the front end. Both models actually have an extra 10mm in the wheelbase, with the saloon 76mm longer than standard overall and the wagon 83mm. A bespoke AMG grille is standard, and for the first time ever an AMG badge takes the place of a Mercedes one on the bonnet. There are E Performance badges, too, four exhausts in the best C63 tradition, standard 19-inch wheels and plenty of exterior options: two Carbon Fiber packages, two AMG Night packages and an AMG Aerodynamics Package. For those buyers that want to shout a bit more about almost 700hp.

The interior follows the outside in being recognisably C-Class with some AMG upgrades, here including bespoke displays for hybrid information and the AMG Performance wheel with what looks like more buttons than ever. The second generation of AMG Performance seat will be an option for C63 customers, featuring ‘seat side bolsters with weight saving openings that also allow better ventilation’. Wouldn’t worry too much about trimming the kilos, however; lightweight hybrid tech still piles it on, meaning that by EC measurements the C63 is a 2,111kg saloon or a 2,145kg estate…

Abundant kerbweight aside, there seems plenty to be encouraged by, even for those of us wearing black armbands for the V8. Two tons hasn’t prevented the GT 4-door from being epic, and the A45 with a less powerful version of this engine is an unforgettable hot hatch. Plus, well, when was the last less-than-stellar AMG flagship? We remain optimisticly optimism. If you’re inclined to vehemently disagree, we refer you to AMG’s Chief Technical Officer Jochen Hermann: “With its Performance hybrid drive and electrically assisted exhaust turbocharger, the new C 63 SE Performance is a technological masterpiece that takes a new approach. powertrain offers a whole new driving experience. The immediate response of the electric drive at the rear axle, the rapid torque build-up as well as the fast power output and also draw of our battery are very special features. fit rear axle steering and the fully variable all-wheel drive with Drift Mode – the new C 63 once again illustrates the high level of technical expertise that AMG possesses”. Or to put it another way: heavy, hugely complicated, outrageously powerful and fast. Like an AMG, then.