Parents let their toddler run wild during eight-hour flight, but what would YOU do?

Thought YOUR Thanksgiving trip was hell? Parents slammed after letting toddler ‘run wild’ during an eight-hour flight where she jumped on the tray table

By Harriet Johnston For Mailonline

Parents flying with their young toddler have been slammed today after other passengers complained she was allowed to run riot on an eight hour long flight.

A traveler, believed to be from the US, shared a clip on Reddit earlier this week after flying alongside a family who were allowing their daughter to fly amok on the lengthy flight.

Posting the clip under the title ‘letting children run wild during an 8 hour flight’, the user shared a video which showed the youngster jumping vigorously jumping on a tray table.

The male passenger in front appeared to be ignoring the commotion, despite his chair jiggling furiously with the movement.

Many other Reddit users were left horrified by the clip, and said they’d be mortified if they were the child’s parents.

One wrote: ‘I would feel like a failed parent if my kids were doing this and I was just straight up allowing it.’

Meanwhile another commented: ‘My parents would have thrown me off the plane mid-flight.’

A third added: ‘The bouncing is obviously infuriating but also the bare feet on the tray table…

‘Always wipe down your stations folks.’ 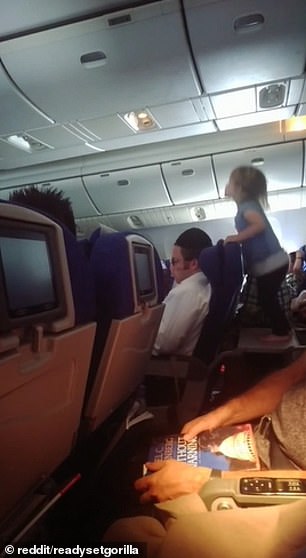 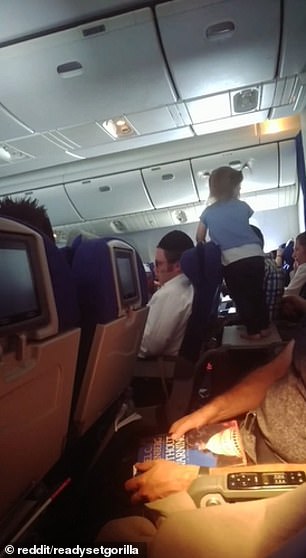 Posting the clip under the title ‘letting children run wild during an 8 hour flight’, the user shared a video which showed the youngster jumping vigorously jumping on a tray table

A fourth wrote: ‘I would never allow one of my kids to disrupt someone this way.

Talking a little loud is one thing. Having your toddler jumping on plane seats while holding onto another person’s (strangers) chair is completely wrong.

‘I hope that man was reimbursed in some way. The parents probably saw nothing wrong with this. Unacceptable.

‘Shouldn’t the flight attendants have intervened?’ another commented. ‘If so, I hope that passenger got some compensation from the airline.’

Meanwhile others praised the passenger in front for remaining calm during the entire interaction. 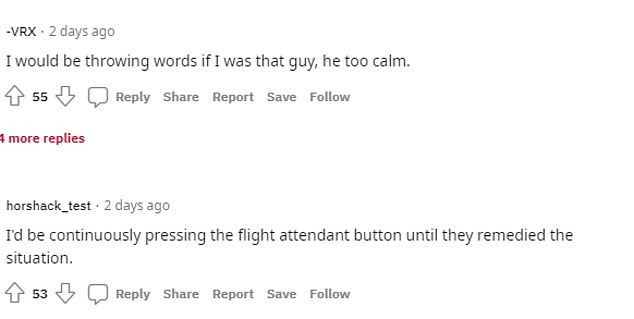 One wrote: ‘How that man remained calm is anyone’s guess..’

Another wrote: Why is that guy just letting it happen? I would’ve said something.

‘That guy is really patient,’ a third added. Some guys really need to control their children.

Others said they would use a different tactic to manage the situation however.

One person wrote: ‘I’d ask the parents to stop her. Then I’d recline and unrecline the seat vigorously.

Kids are resilient. She’d be okay after the fall.’ 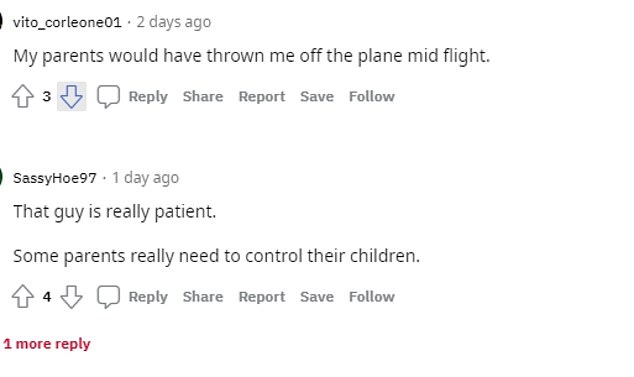 Many Reddit users were left horrified by the clip online, with some saying the parents were at fault for the child’s behaviour.

Earlier this week, a former flight attendant revealed the type of passenger cabin crew hate the most.

Kat Kamalani, from the US, worked on planes for six years, and recently posted a TikTok video in which she said it’s not babies who annoy the crew, but rather the people who complain about the babies.

The social media star and mother-of-two explained there’s nothing worse than this type of complaint because it makes both the parents and the staff uncomfortable.

Big Tech is acknowledging ‘a new reality’ with layoffs: Jefferies