Before unveiling the production version of the new R5 EV, Renault honored the iconic supermini for one last time with a one-off electromod version of the R5 Turbo homologation special. The R5 Turbo 3E concept is a fully electric hot hatch with 375 hp and a redesigned exterior inspired by gaming.

The R5 Turbo 3E is a follow-up to the R5 Turbo and R5 Turbo 2 production models from the ’80s, built on a tubular chassis with FIA-approved roll bars. As hinted by the E letter on the name, though, this one is fully electric. While Renault engineers could make it insanely powerful, they chose a more sensible output of 375 hp (280 kW / 380 PS) from a set of rear-mounted electric motors, which is still more than double the output of the original ICE-powered models . With a monstrous torque of 700 Nm (516 lb-ft) transmitted to the rear wheels, the concept is a “pure drifter”.

See Also: R5 Turbo 3 Is A Cool Restomod Of The Homologation Special By An Independent Company

The powertrain sources its energy from a 42 kWh lithium-ion battery mounted under the floor. Renault didn’t announce range figures but a full charge only takes 2 hours via a 380V charger. The battery weighs 520 kg (1,146 pounds) but the rest of the vehicle tips the scales at 980 kg (2,160 pounds), making it pretty lightweight for an EV. As for performance, the hot hatch accelerates from 0-100 km/h (0-62 mph) in 3.5 seconds (or 3.9 seconds when Drift mode is selected), with the top speed being electronically limited to 200 km/h (124 mph) ).

Styling-wise, the R5 Turbo 3E is a modern reinterpretation of its predecessors, staying true to the original recipe with slightly exaggerated proportions and modern styling cues inspired by video games. The concept measures 4,006 mm (157.7 inches) long, 2,020 mm (79.5 inches) wide, and 1,320 mm (52 ​​inches) tall, with a wheelbase of 2,540 mm (96.5 inches). All those figures are increased compared to the ICE-powered R5 Turbo, with the exception of the height which is identical. 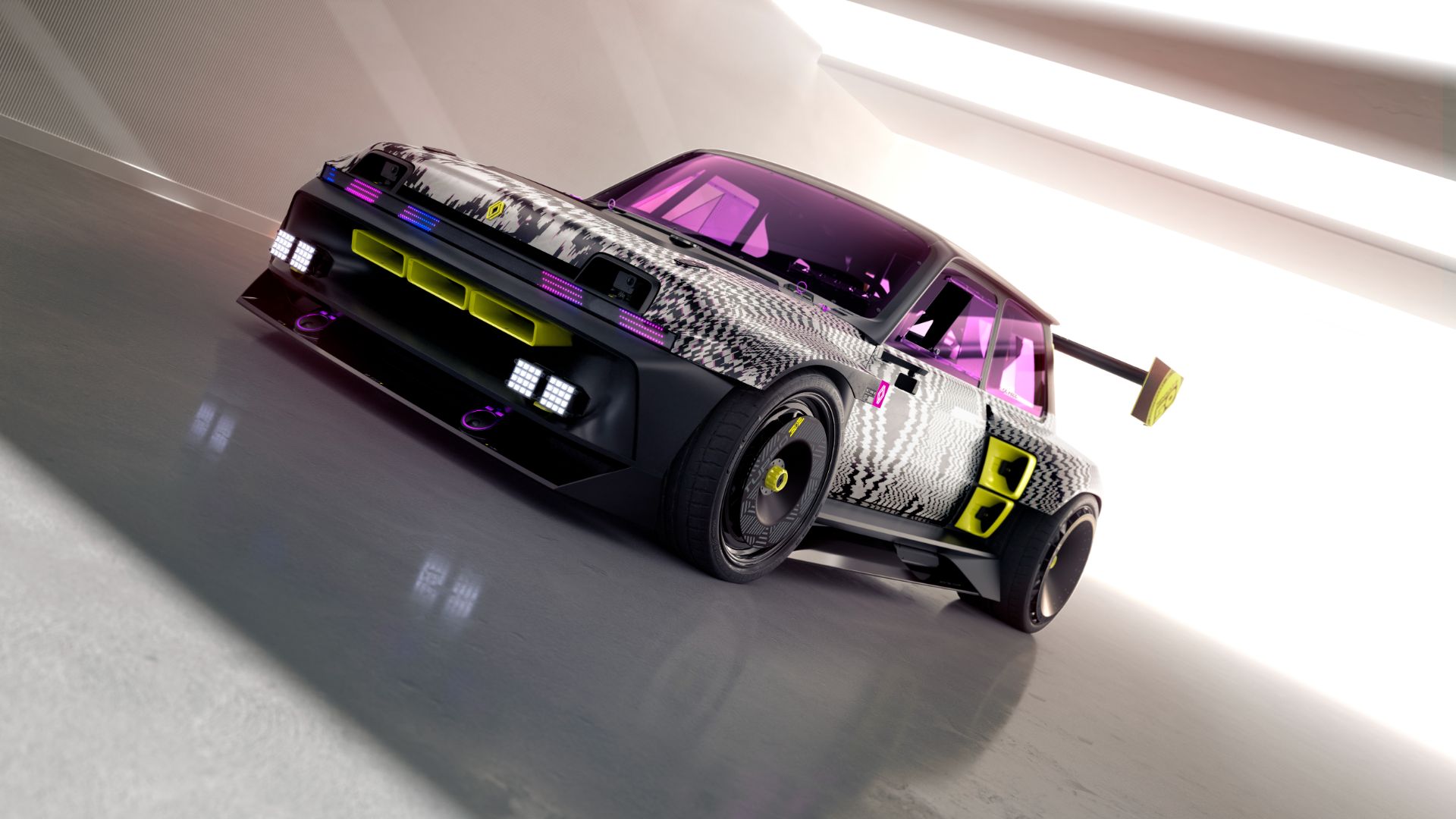 The carbon fiber body is painted in a fancy livery, combined with pink plexiglass for the greenhouse and aero-style rims measuring 19-inches at the front and 20-inches at the back shod in mixed tires (225/35R19 front and 325/25 /R20 rear). The bodykit is redesigned, with even more crazy aero components than before, including a prominent front splitter, yellow-painted intakes, ultra-wide front and rear fenders, and a massive rear spoiler.

The headlights have been replaced by pink, blue, and yellow LED strips alongside additional rally-style LEDs on the bumper. Similarly, the taillights are smaller, leaving more room for the openings. Some of the iconic features have been reinterpreted, like the bonnet scoop that is now housing the charging port for the battery, and the inlets that provide a great view of the EV underpinnings. 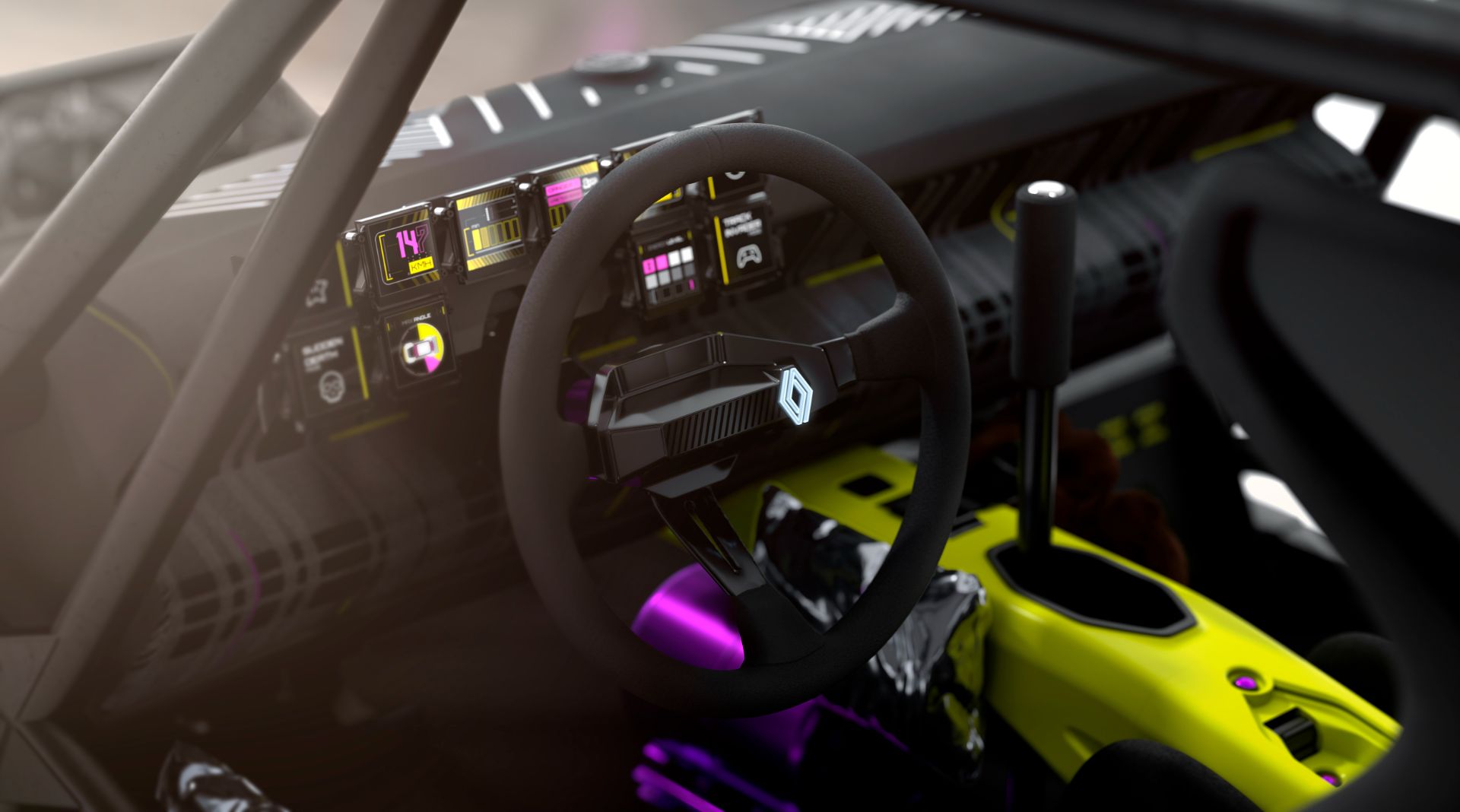 Inside, we find two carbon-fiber racing seats by Sabelt, a futuristic 10-screen digital instrument cluster, a retro-style dashboard, tartan and Alcantara upholstery, a yellow-painted center tunnel, and a drift-style handbrake. There is also a teddy bear called “Drifty”, with the goal of helping passengers relax after a drift show. The driver can choose between different modes including Turbo (drifting), Track Invader (playing), Donut (360-degree spins), etc.

A total of 10 mounting brackets for cameras inside and outside the vehicle make a perfect case for capturing footage of tire-burning sessions. Furthermore, the driver and the co-driver of the R5 Turbo 3E will wear special suits by fashion designer La Fameuse during its premiere.

The R5 Turbo 3E will make its public debut at the Chantilly Arts & Elegance 2022 contest on September 25 before being exhibited at Renault’s stand at the 2022 Paris Motor Show in October. Mind you, this is the second electromod concept by the French automaker this year after the Renault 5 Diamant.

DALL-E is now available to all. So let your imagination soar : NPR