Who should England pick to face USMNT? Our writers’ verdicts

After the 6-2 dismantling of Iran, England are in control of Group B at the World Cup. But up next is a trickier text — USMNT, who drew 1-1 with Wales in their opening match.

So, given the displays of both sides in their first games, who should Gareth Southgate pick to face the Americans, with another three points on Friday guaranteeing a place in the knockout stages?

With captain Harry Kane now declared fit after picking up a knock to his ankle in the Iran game, our writers pick their XIs…

Jack Pitt-Brooke: No need to change

Why change a winning team? England were very good on Monday and unless any of these players are unavailable it does not make sense to start rotating yet. If England win this one they can make changes for the group finale with Wales on Tuesday, at which point Kyle Walker, Phil Foden, Eric Dier and so on could come back into the starting line-up.

But this is England’s strongest team right now and so they should stick with it. Get some more minutes into the players’ legs, try to win the group on Friday and then they can take it from there.

Please allow me a moment to toot my own horn: Ten of the players I put in my prediction for the Iran game ended up making Southgate’s starting line-up.

For Friday’s match, US coach Gregg Berhalter appears to want to play a possession-based game.

At their best, the Americans can be defined by their positional discipline, if not clinical moves in the final third. However, they do like to get bodies forward when attacking and while their central midfielders are tackle-savvy, this side can be hit on the break.

So I’m going with a repeat of England’s XI v Iran. Again I’m telling Bukayo Saka and Raheem Sterling to get chalk on their boots. Marcus Rashford is my first attacking sub. 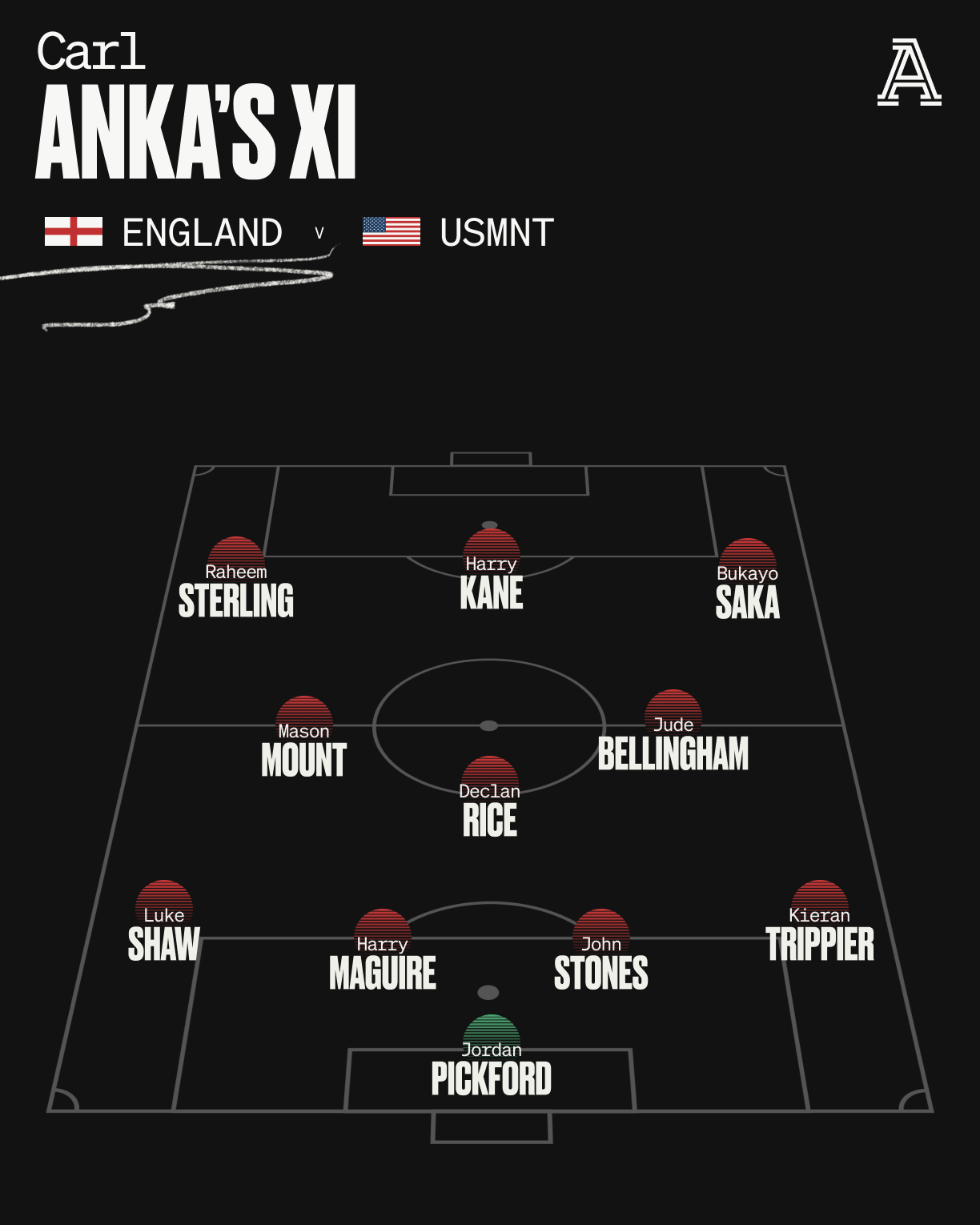 Let’s not change too much because that Iran game was as good a performance as England have produced in a tournament opener.

The defense could benefit from some continuity, so let’s keep that the same, and the midfield functioned really nicely, too. No need for tweaking there.

Rashford for Saka in attack might work. Obviously, the latter was spectacular against Iran, but Rashford is closer to being another No. 9, even when he occupies a wide-forward role, and his threat inside the box might be productive against an American center-back combination which isn’t the Most mobile and looked sensitive to Wales’ attacking combinations in Monday’s second half.

Let’s give Saka’s ankles (some of) the evening off, because he’s going to be very important if England are to do well at this tournament. 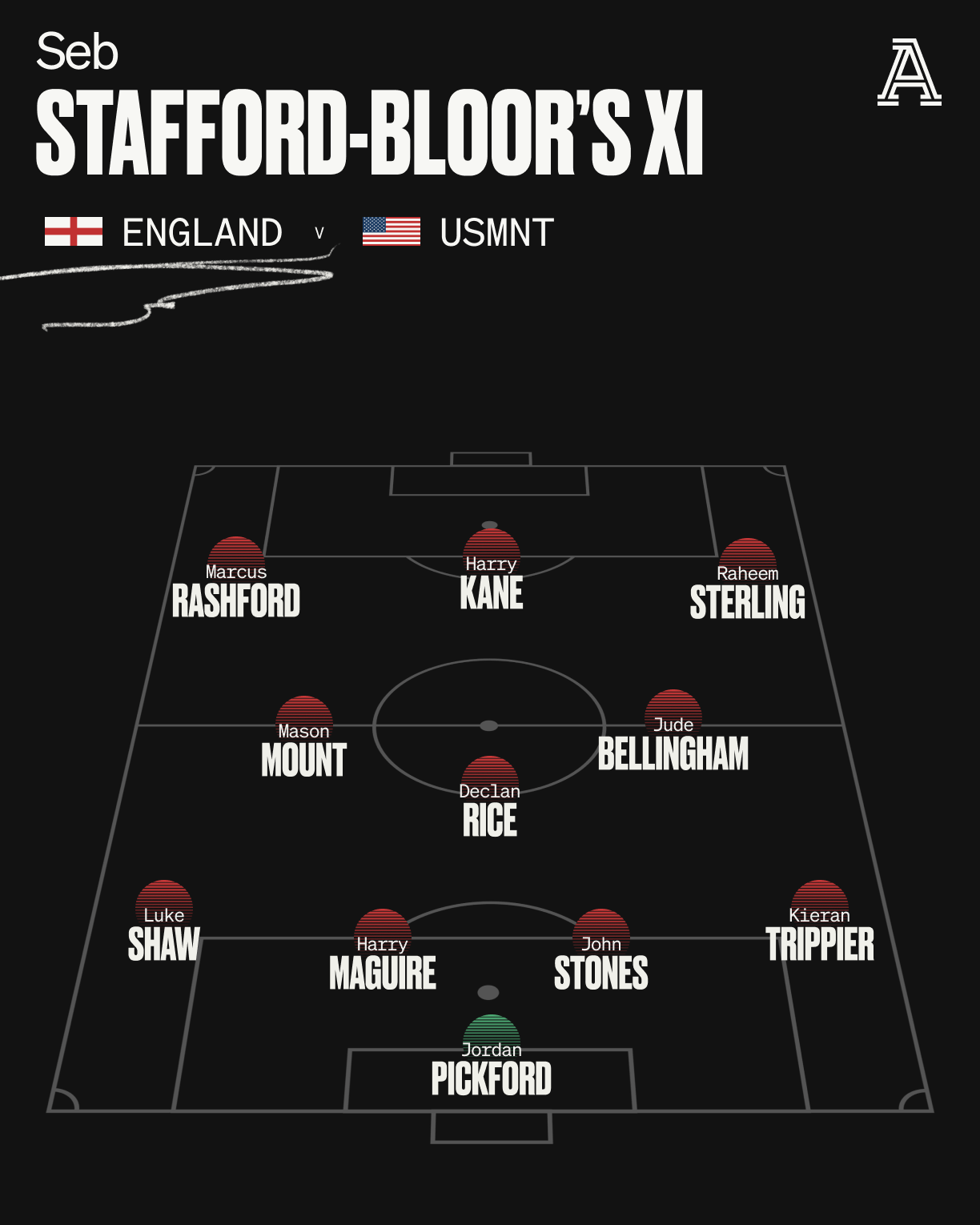 Stuart James: I still have concerns at the back

As with Carl, I also feel vindicated – because I said Southgate wouldn’t pick the team I suggested for the Iran game.

The England manager’s line-up worked and, on that basis, it seems silly to change anything for the match against the United States. I’m really glad Southgate went with a back four – get the attacking talent on the pitch – and I hope that remains the case throughout the tournament. England looked very good going forward against Iran and, in fairness, Sterling justified his inclusion (I’d have gone with Foden instead).

At the back I still have concerns and the Iran game didn’t change anything in that respect. Harry Maguire was a huge threat in the opposition penalty area, but I didn’t like the first goal England conceded (the extent to which Maguire was unable to deal with that because of feeling unwell is unclear). It will be interesting to see how we fare defensively against a better opponent on Friday. 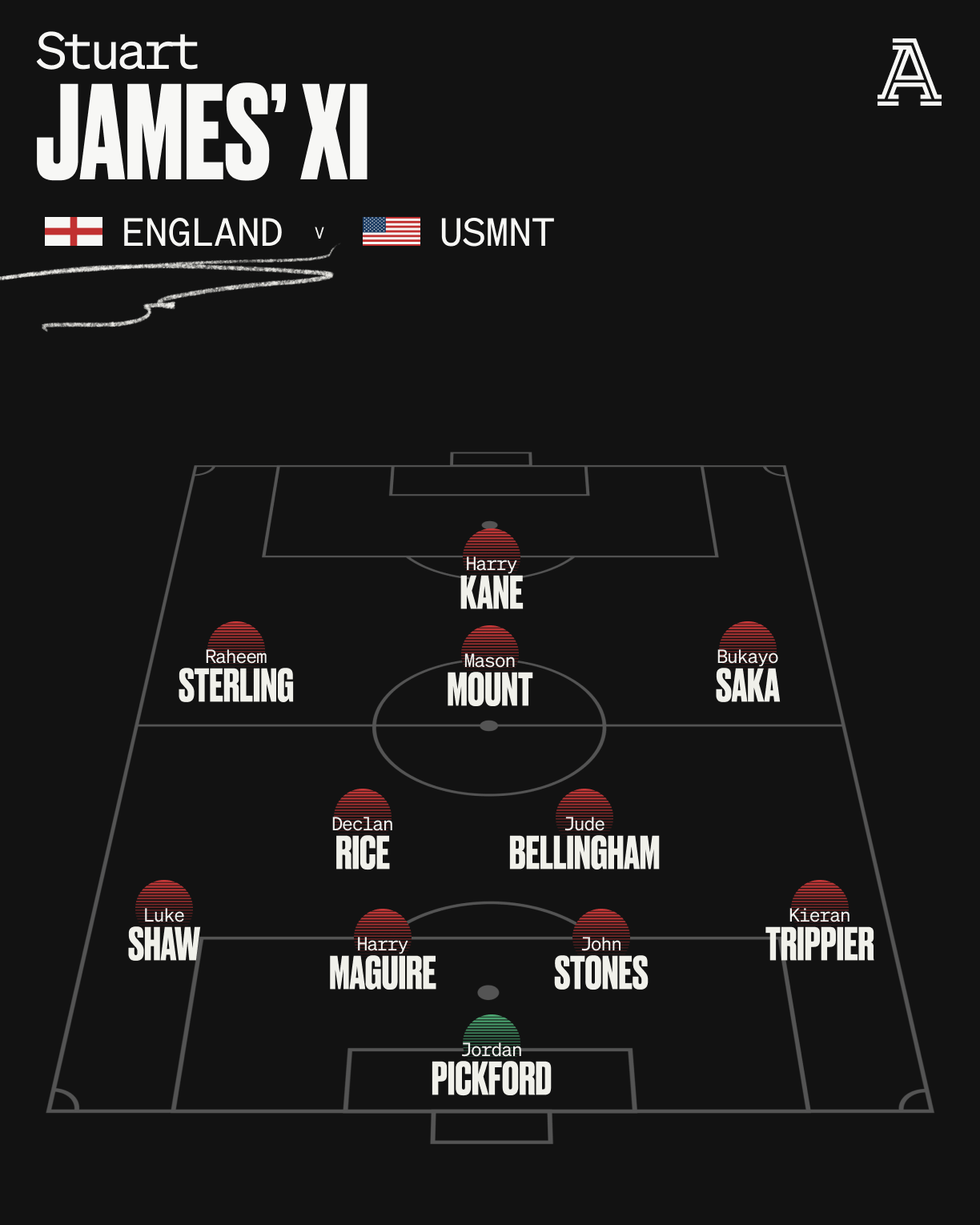 I loved the energy and creativity from the three behind Kane against Iran but we know what Sterling can do (and has done time and time again in an England shirt), so I’m going for Foden on the left instead.

I’d suggest giving Kane a rest and injecting even more pace into that attack, but we all know that’s not going to happen now that he’s been passed fit. 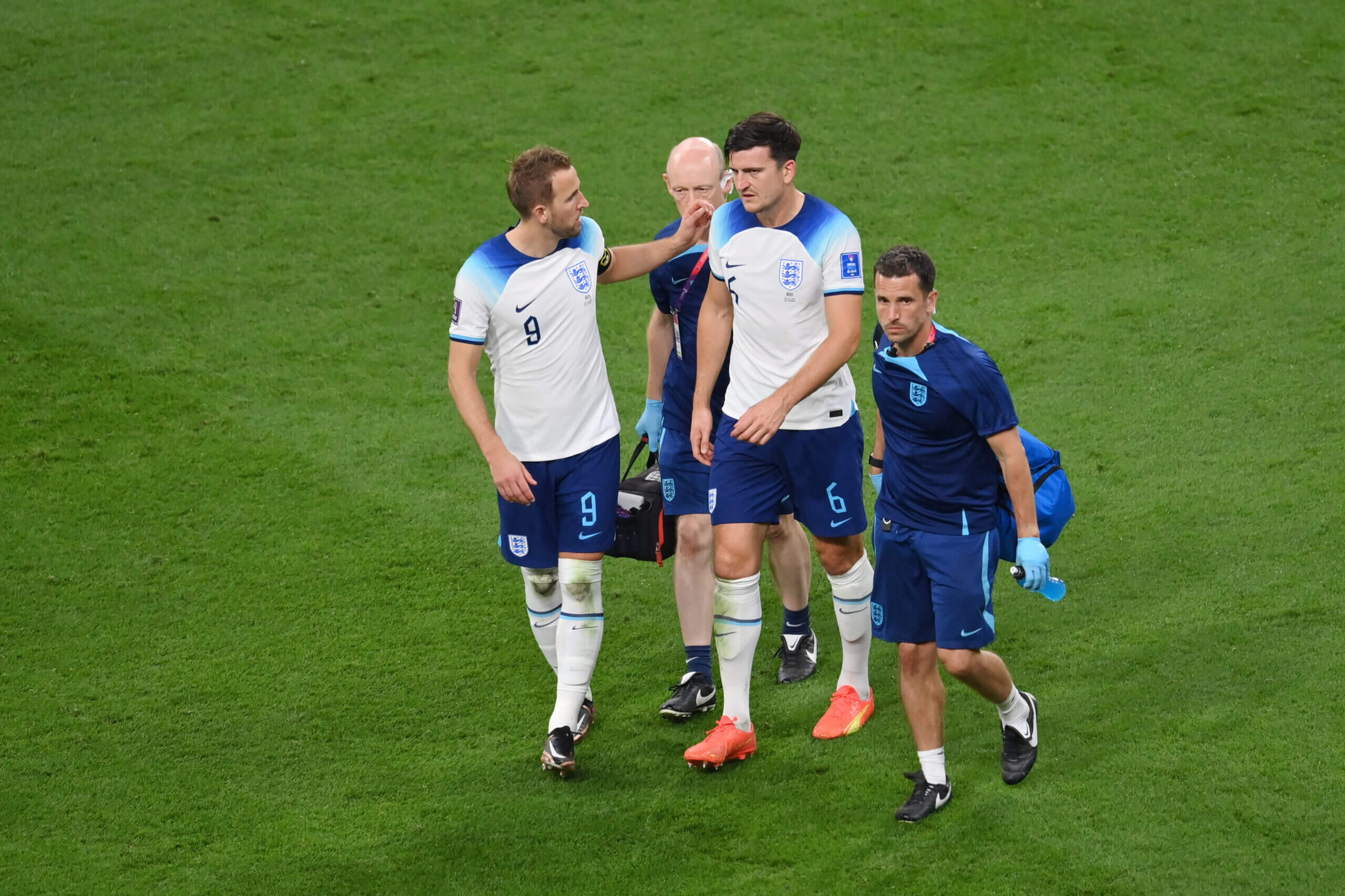 Defensively, assuming Maguire is OK, let’s stick with the back four from the first game — not least owed to the Manchester United defender’s aerial threat against a US team having all sorts of problems in the center of their defence. Declan Rice will need to give England more protection than he did at times in the second half against Iran, though.

Then, if Walker can get some minutes and England can back up Monday’s performance with another win, maybe it’s time to try a back three in the final group match against Wales. 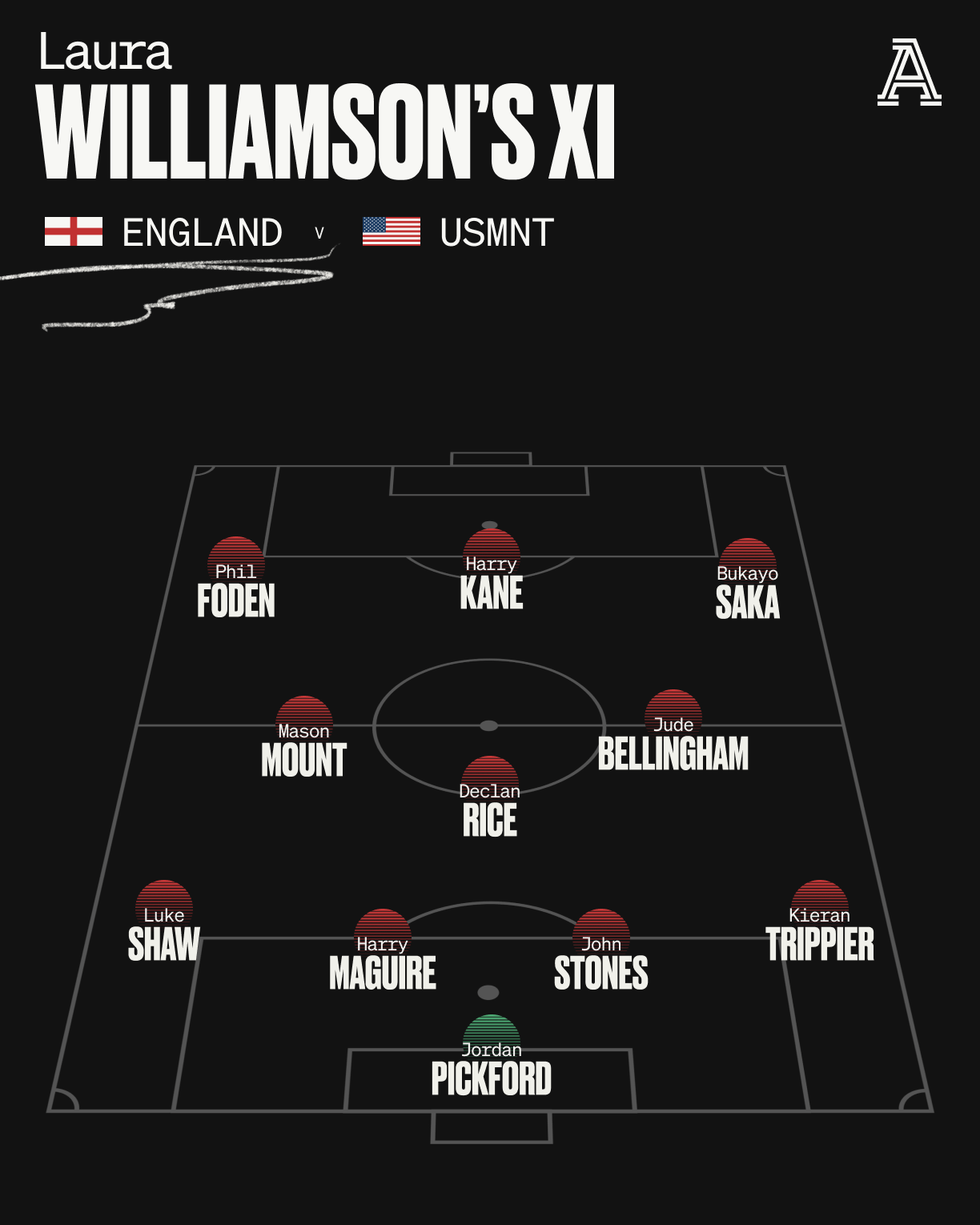 Oliver Kay: Workload should be factored in

If Kane is totally fine, I’m happy to stick with the same line-up. The only question is whether the quick turnaround between the three group games means you should rotate the squad for the second; there’s a longer gap between the third game and (potentially) the round of 16 tie, so if there are players whose load needs to be managed, now could be the time.

That is worth considering, but my instinct would be just to go with the same line-up rather than overthink it. (After all, it’s not my head on the block.) I liked the line-up against Iran, switching to a back four with Mason Mount in midfield, and it worked really well.

One other thing: I was really happy to see Foden come on in midfield on Monday. I wish we had seen more of that — with Manchester City as well as with England — because he’s a wonderful player who seems to have what it takes to become that kind of roaming creative midfielder. Ideally you don’t want to be experimenting with that at a World Cup, but I hope we see more of it, even from the bench. 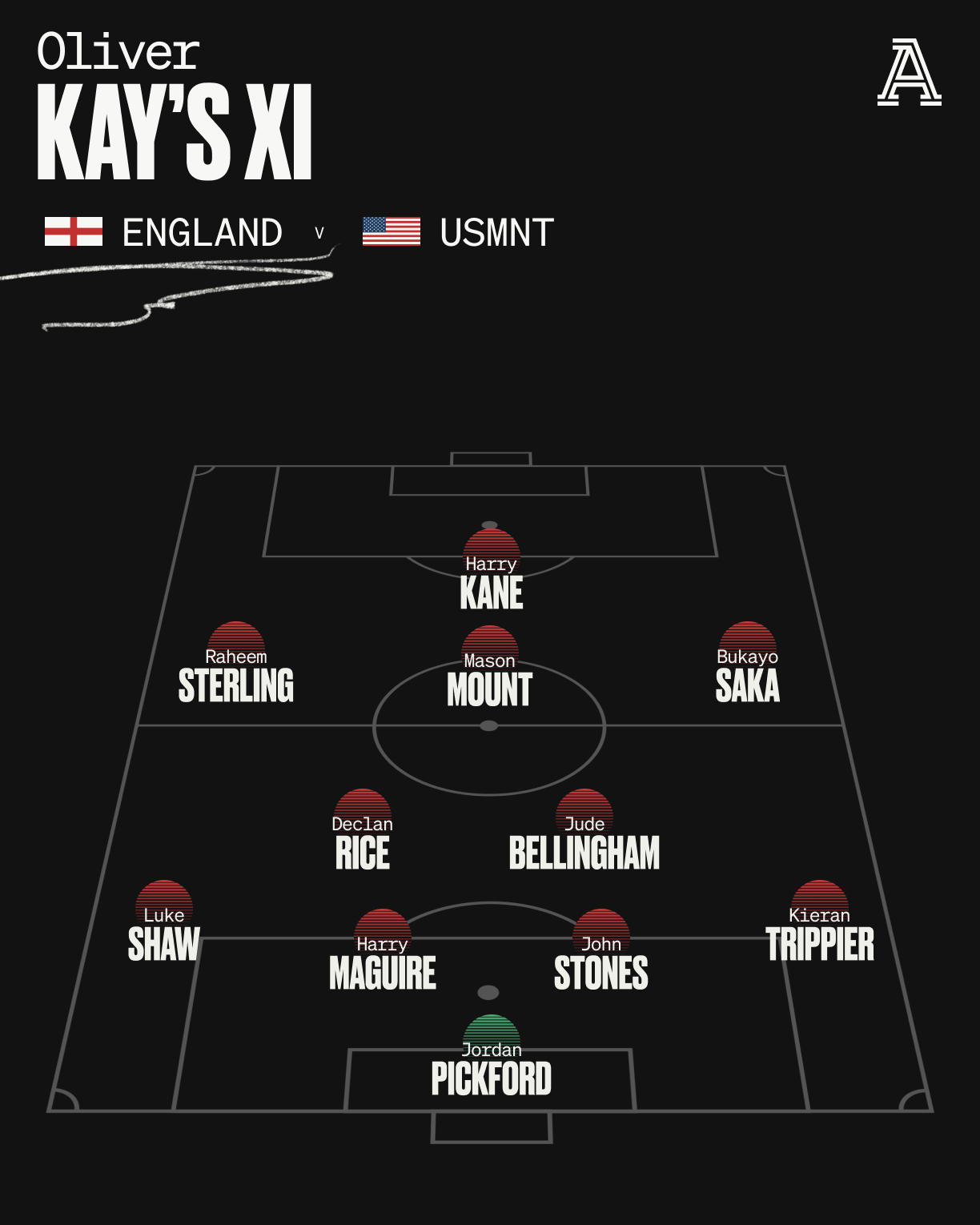 The United States will provide a far tougher test than Iran so this is no time for complacency, but England has set a bold tone and need to maintain it. Stick with the back four – Dier would come in for Maguire if his illness lingers – and that extra man in midfield, while freshening up the forward options by starting Foden ahead of Mount given this system so easily morphs into a 4-2-3 1.

If all goes to plan, there would be game-time for Kalvin Phillips and Walker off the bench, though probably only after Rashford and Jack Grealish have made a mark. 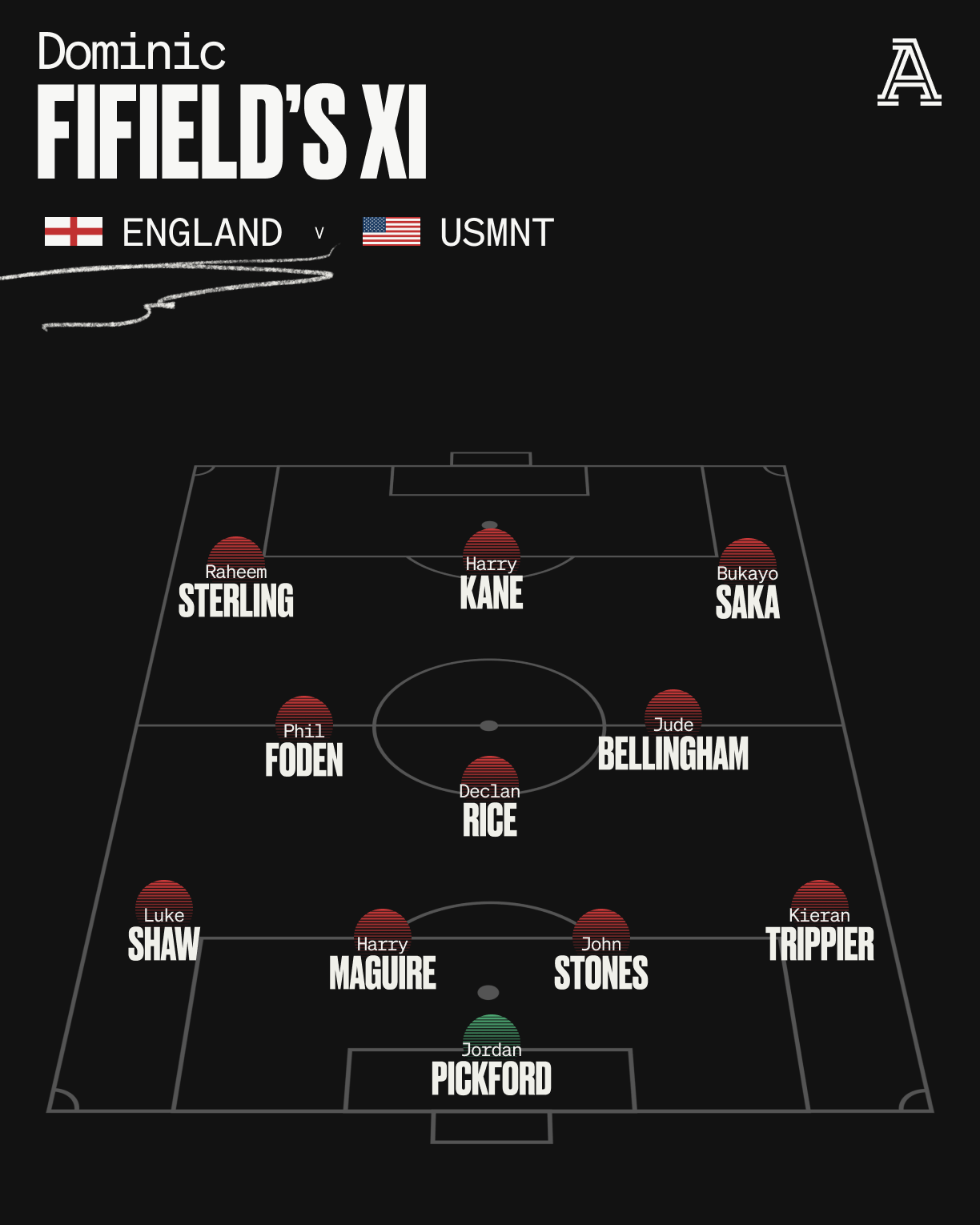